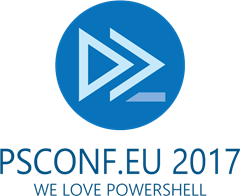 Time flies when you are having fun! I’m am sure having fun these days. Another year started and so did preparations for PowerShell Conference EU. We are going to re-visit Hannover and I must say I’m already counting down days. Last year’s conference was a total blast. It all started with big BANG and even though later there were some small issues, it was awesome. The only problem organizers will face this year is to leave up to the expectations. And the bar is high, so it will not be easy to jump over it…

First slot on the first day after lunch is the time when I will present on PowerShell on Linux and GitHub. Something I was looking forward to for years, something that I dreamed of. It’s obviously not there yet – we are still looking at alpha code. But if I compare it to Pash (with all due respect) – it’s a very solid version that in most aspects works as PowerShell should. With almost monthly drops, we can not only see but also participate in development of PowerShell vNext. And that is a second, for me perhaps even more awesome element of the puzzle: PowerShell on GitHub. If you look how many changes are added thanks to community… Like Join-Path accepting array of path elements – awesomesauce! We can directly influence where project is heading, but also participate in it (if we are skilled enough). That and more is a content for this session. I’ve already presented it last year for my friends in Poland (obviously, in Polish). I’m really looking forward to this one.

Linux at your door

Second session planned for second day just before the lunch, is another Linux related session. The only worry I have for that one is that I will have to cut a lot to make it small enough and fit in time slot.

I plan to focus mainly on pywinrm and what I did with it at work with my team mate (Linux admin) to make it possible for our Linux folks to manage “stuff” on our Windows servers. It’s real-deal, juicy meat – expect demos, real life experience, notes from the field. Everything that I personally like the most in technical presentations. I hope attendees will enjoy it too. I also hope to add some content more “for future use” – but that will be done in coordination with Ben Gelens, who has session just before mine (and I think if you are interested in xplat – you should attend both!)

Tab Expansion Plus Plus

My last session is scheduled for last day of conference (and second to last time slot). In that session I’m going back to the project I participated a bit in the past. I got a bit frustrated/ pushed away when it became part of PowerShell itself. There was a huge disconnect between how the things were done in v3 complaint/ GitHub version and version distributed with PowerShell. The main reason I’m back at it? All our servers (well.. with few exceptions that are there due to compatibility issues) and workstations (at least one that I care about) run on WMF5+ – so I could re-visit tab expansion and improve on it (using build in attribute that works only in PowerShell 5 and above). No worries though – I’m planning to cover v3 ways mainly, and present v5 just as a sneak-peek on what future will bring. Again: demo-heavy session with lots of code and probably as few slides as possible…

Hope to see you there!

To wrap up this – I would like to invite you to come to this conference. I’m not sure how many seats are still available, but I wouldn’t hesitate – I’m sure you won’t regret. Yes, it’s not cheap, but apart from sessions you also pay for opportunity to talk to PowerShell team members, community experts, MVPs, other people like yourself that love to use keyboard to solve the problems and learn a ton of things that are both using latest and greatest, but also stuff that is out there for while and won’t require installing v5 everywhere. In other words: I’m pretty sure everybody will find something she or he can benefit from. With 3/4 tracks there is a lot to pick up from. See you there!